From tacos to gyros to classic Carolina fare, food festivals are back this year to sample all sorts of cuisine.
By Ethan Harrell 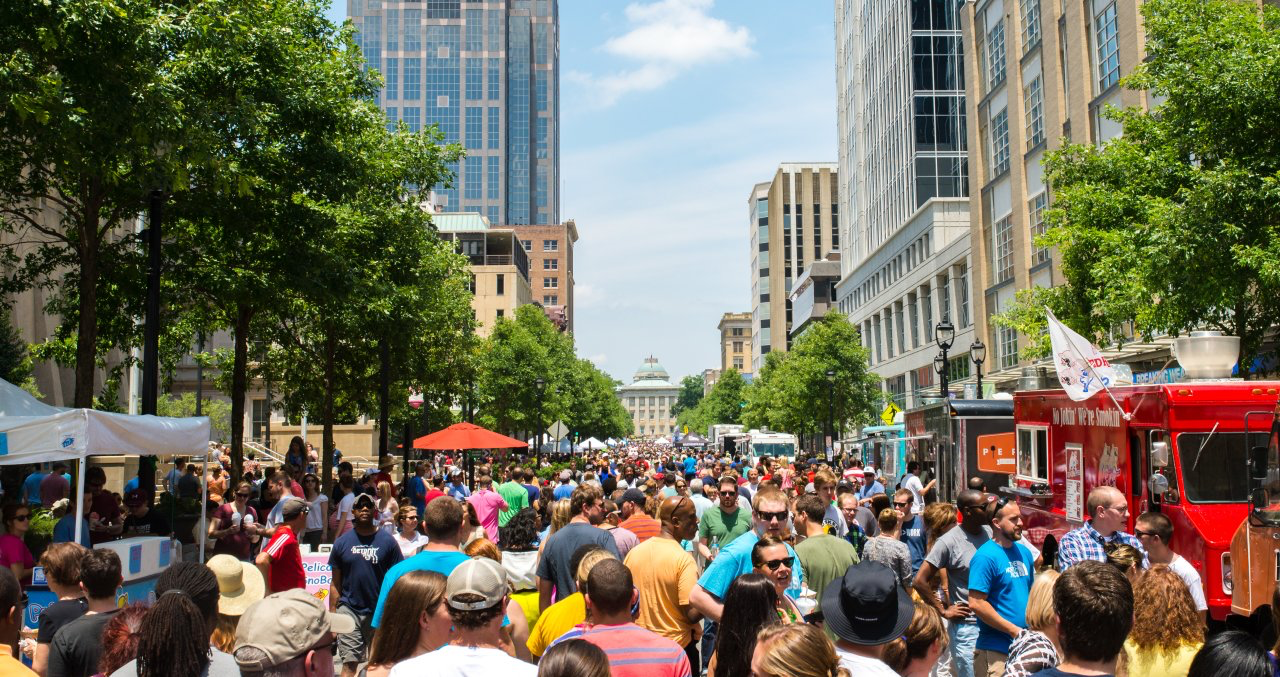 Can’t you smell it in the air? The smoke coming from the food truck kitchens, wafting smells of pulled pork, fried vegetables, and teriyaki chicken. After a year-and-a-half break, vendors, restaurants, and breweries alike are coming back to fill the streets of the Triangle with various cuisines, beverages, and entertainment.

Durham and Pinehurst both celebrate inaugural festivals this year, with the Durham Summer Wine and Food festival and Pinehurst Barbecue festival. Carolina’s most historical festivals return this year as well, like the North Carolina Apple Festival in Henderson, which celebrates its 75th anniversary this year. These milestones reveal the deep roots of culinary craft in the state and the growing number of festivals each and every year. Take a weekend off for the family and your tastebuds with any of these Carolina food fest options.

Food trucks galore will be the scene on a summer Sunday in Durham at the Taste of Soul Festival. Multiple vendors, including Lee’s Kitchen, Jay’s Italian Ice, and Pablano’s Tacos from around the Triangle, including will stop by Durham Central Park to deliver the best soul food of all different varieties. BBQ, Tacos, Seafood, and Italian Ice are all a part of the diverse menu of this year’s “Variety Edition” festival. For a taste of everything all in the same place, take a visit to bustling downtown Durham.  August 15; 1 p.m. -5 p.m.; General admission is free; 501 Foster Street, Durham; Details here.

The zest of the Mediterrenean, the confections of South Korea, and the spiciness of Venezuela can all be savoured at the Raleigh International Food Festival. Located in the heart of downtown Raleigh, the festival is a multicultural display of music, dance, games, and especially food. Almost every flavor of the globe will be represented in this sprawling celebration hosting over 17,000 yearly attendees.  August 28; 12 p.m. – 10 p.m; General admission is free; 100-200 Block Fayetteville St., Raleigh; Details here.

Late this summer, the historic village of long brick walkways and horse-drawn carriages will be home to the first Pinehurst BBQ Festival. The Pinehurst Resort will present festival-goers with the sweet and tangy side of North Carolina, with pitmasters Christopher Prieto of Prime Barbecue in Knightdale and Joe Lumbrazo, Head Chef of Backyard Bistro in Raleigh. Feast on fresh pork in a prime North Carolina destination and excellent hospitality village. September 3-5; Tickets prices vary; Festival kicks off at 300 Magnolia Rd, Pinehurst; Details here.

Wanting a weekend in the Appalachians before the school year begins, make a pitstop in Hendersonville for the annual North Carolina Apple Festival. Main Street Hendersonville will bustle with performances, apple vendors, and the King Apple parade on Labor Day. Attend North Carolina’s oldest food festival, in the county that supplies more Granny Smiths and Honeycrisps than any other in the state.  September 3-6; General admission at no cost; 2951 Chimney Rock Rd, Hendersonville; Details here.

The North Carolina State Fairgrounds hosts the Raleigh Greek Festival this fall, which features generational greek recipes from the Greek Orthodox Church and it’s one that has drawn thousands each year for its authentic cuisine and lively entertainment. Gyros, stuffed eggplant, and Greek wine will all be available for purchase along with dozens of other vendors selling things like jewelry, art, baked confections. Enjoy dance, lecture, and fine dining at this family favorite event.  September 7-9; General admission at no cost; 1025 Blue Ridge Rd, Raleigh; Details here.

“Brew it, Taste it, Sip it, Pork it” will be the phrase heard around Koka Booth Amphitheatre at the Cary Beer, Bourbon, and BBQ Festival. The festivities include a line of hog, rib, brisket, chicken, and sausage vendors plus festival games and contests at the Conchon Carnival. The festival includes whole hog workshops and a tasting theater with a line of brewmasters. September 10-11; Tickets start at $30; 8003 Regency Pkwy, Cary; Details here.

Raleigh’s signature brewing festival, Brewgaloo, returns after a two-year break to present the most premiere craft pours from across the state. The festival is split up into the Friday Night Block Party where ticket holders are given an unlimited number of sample size pours and the Saturday Street Fest where the craft breweries will number up to 110 and food truck vendors up to 50. There’ll be aged wine, craft beers, and ciders abound at this prime Triangle drinking jamboree.   September 17-18; Tickets start at $25; Fayetteville St, Raleigh; Details here.

This fall, the taste of Mexicana, German, and Guatemalan cuisines arrive to Eastern Wake County for the Wendell International Food & Music Festival. Celebrating it’s 19th anniversary in 2021, the global food extravaganza allows guests to dine for a charitable cause. A large amount of festival proceeds go to the food pantries in the surrounding Wendell area. Make sure to bring your raffle tickets and colorful taste buds for this cuisine celebration on the countryside.  September 25; General admission at no cost; J. Ashley Wall Towne Square, Wendell; Details here.

There’s a reason North Carolina is always mentioned at the top of seafood destinations, and the NC Seafood Festival is the perfect display of this delicious reputation. Sample tons of ocean fare from crawfish, jumbo shrimp, crab, calamari, and tuna will all be in stock at the ocean town of Morehead City. There will be games and rides for the whole family with the smell of the seawater closeby. Stop by the coast for one of North Carolina’s most treasured and long-running food festivals.  October 1-3; General admission at no cost; Downtown Morehead City; Details here.

Dress up as your favorite superhero, enjoy gigantic board games, and shop and dine with almost a dozen vendors tailored to the geek in you. The Geek and Grub Festival is a North Hills gathering of the greatest indie designers, specialty breweries, and off-brand artists from around the area. Cosplay is encouraged and interests of any kind are welcome.  October 9; 12 p.m. – 8 p.m.; 4011 Cardinal at North Hills Street, Park at N Hills St, Raleigh; Details here.