Around University of North Carolina Chapel Hill’s campus and local coffee shops around town, unique futuristic machines dispense short stories and fiction with just the wave of a finger through the college’s Arts Everywhere program. 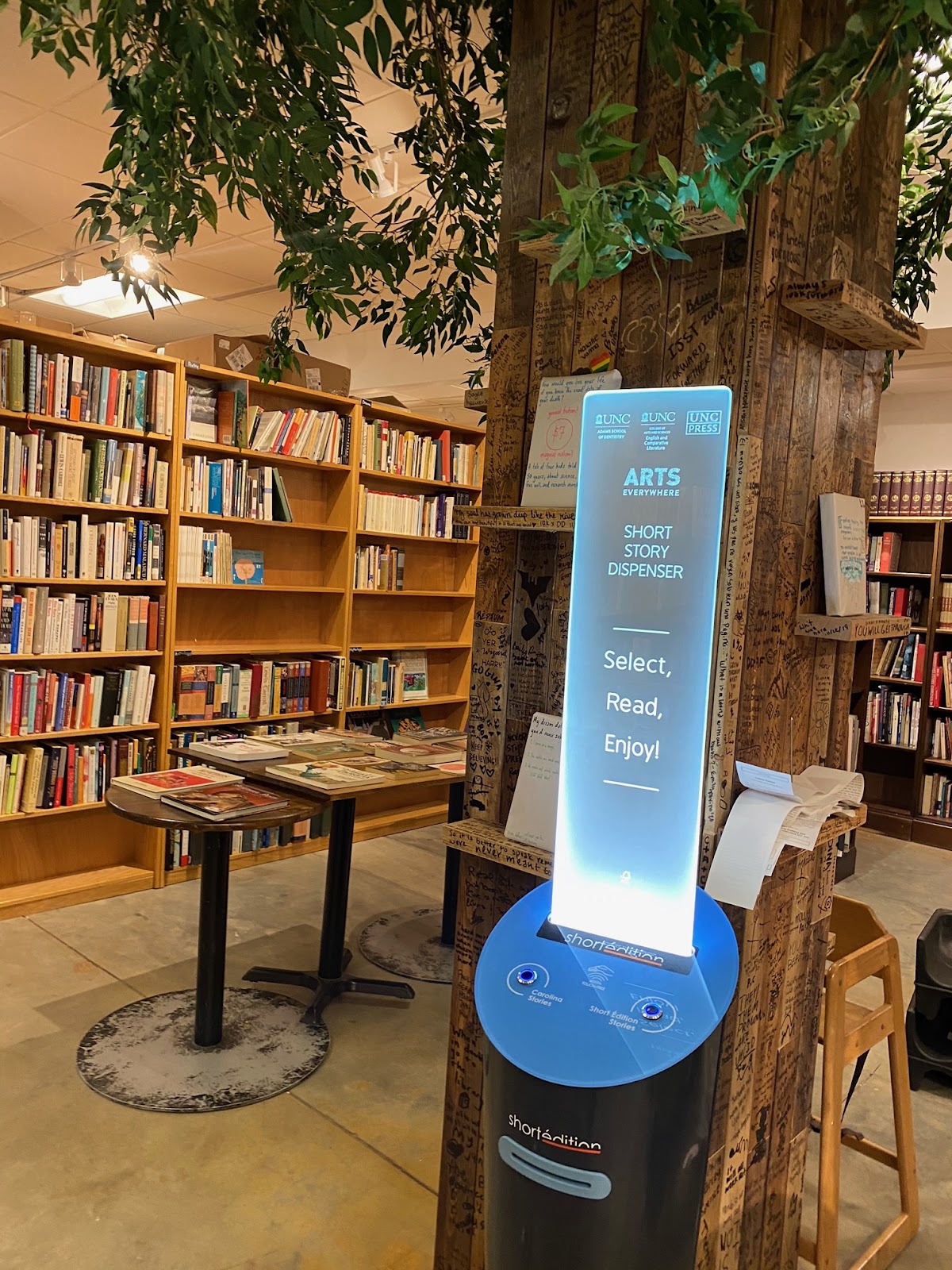 Though Honeysuckle Café in Carrboro has the bohemian hum of readers, drinkers and poets, you might be surprised to find a cache of free short stories stowed in its back corner. Namely, in a slim metal machine giving off a blue glow. With the wave of a finger over the no-touch Short Èdition button, you’ll be given access to short stories from around the world. But choose the Carolina Stories button instead, and you’ll receive limitless short stories from around North Carolina. Both first-time writers and long-time authors fill your options — would you want a veteran’s poetic ramble, a criminal’s absurd scheming, or another tale entirely?

These stories (which are only the size of receipts) suit quick reading, whether you’re standing in line for coffee or waiting for your bus to hiss to a halt before you. A quick read which anyone can access, that’s the philosophy of these eight short story dispensers which dot Chapel Hill as part of the Short Story UNC program.

Writer and UNC professor Daniel H. Wallace agrees that the receipt-sized stories deserve a joke. “They look like something you can wrap a mummy in,” he says in the skimming tone you’d expect from the author of Big Fish. As the Director of Creative Writing at UNC, Wallace has an insider’s understanding of these short story dispensers. “The philosophy of the machines,” he says, “is that you come up and press the button, and you get something you can read in one or two minutes.” Their mission seems lofty but also tangible: “This is a public forum that makes it easy for anyone to get a story, and it opens the public imagination to what’s possible in short fiction.”

As he explains the story dispensers, he references the help they received from UNC’s Arts Everywhere initiative. UNC’s English and Creative Writing Departments partnered with Arts Everywhere, which later led the charge to bring free short stories into the campus and its surrounding community. It had required some European influence first, according to the Arts Everywhere associate director, Kathryn Wagner.

“We really wanted to take a moment and highlight the literary arts,” Wagner says, “and also dig a little deeper into the rich tapestry of writers that we have at UNC.” And so the team solicited help from a French publishing house called Short Èdition, which had already placed other machines across the world. Compared to the far forests of New Zealand or the urbane scene of Paris’s Charles de Gaulle Airport, quaint Chapel Hill seemed unassuming. But Wagner required changes to the machines before they could become the first such dispensers in North Carolina.

“We asked them not only to change the machines’ colors from orange to Carolina blue,” she explains, “but also to change the buttons and have them be more applicable to how we wanted to celebrate Carolina writers.” That’s how our machines came to have the Short Èdition Stories and Carolina Stories options — usually, the buttons only determine the stories’ length. If you select either button, the machine chooses your story randomly from the online cloud of options. Which, Wagner says, is intentional and beneficial: “It really is supposed to be this unexpected moment of great writing.”

And the unexpected moment of great writing often comes from our own backyard. “We have maybe 20 undergrad stories on [the machines],” Wallace says. “We’re populating it with more students.” He and the rest of UNC’s Creative Writing faculty supplied stories, as did UNC Press, another partner behind the dispensers. Short Èdition rounded out the selection from English-language stories that hail from almost everywhere. But the dispensers’ mission remains with untried student writers.

“We work with UNC students and faculty to write and publish their own work,” Wagner says. “Especially for students, the opportunity to get published on a platform like this is pretty neat.”

Wallace, as a professor, has heard from these students directly. “A lot of students do the stories on their own,” he says, “and they love the stuff that they read. They love the access to it.”

As a poet and collage artist, Benedict had been browsing the school’s options for student creatives. “I’m really happy that it was accepted here, it’s based off a real experience and it was something I wanted to share,” he says. The story, a poetic ramble from an unnamed veteran narrator, suits the quick-read ethos which spurred these machines in the first place. Benedict, whose idiosyncratic writing shows that he’s no cog, fits into the greater system of dispensers nonetheless.

That system also supports established North Carolina authors. For instance, two established writers appear in the randomized draws: former Duke professor Elizabeth Cox, with her story “A Way in a Manger,” and former Southern Culture editor David Shaw, with his story “The Assistant D.A.” The first story follows the backstage whispers of a third-grade Christmas play, while the second follows the futile angling of a foolish defendant. These pieces show the breadth of the dispensers’ selections — you can’t guess what (or whom) you’ll read, and your surprise sharpens your reading pleasure.

The dispensers’ exact locations might also surprise you — they all move, usually without warning. For instance, one will soon appear in Durham’s Ninth Street Bakery. But why do the machines have to move, exactly? “To allow more people to happen upon this great literature,” Wagner says. Even despite the public disincentive of COVID-19, we should expect the dispensers to continue popping up around Chapel Hill and (soon) Durham.

Which futuristic machine of global and local stories can you find first? We’ll list the buildings where you can find them for the moment, since our favorite bookstores and libraries haven’t gotten to welcome their members as freely as they normally would. That’s why finding your nearest short story dispenser is a better option than ever before!

Where to find these free short stories as of December 8:

The Adams School of Dentistry

However, their movements make them tricky to track: try monitoring the Short Story UNC Twitter page for real-time location updates.